It's that time of year again. The blessed event when Boise and Eagle turns up it's fabulousness and is home to the combined annual Boise/Eagle Tour de Coops. This year's theme is Henzilla: Rise of the Chickens. (Awesome).
So much hard work and effort is put into this event by Erik Kingston and his committee. We'd like to officially extend a BBC high five to all the wonderful people who participate in this event.

Erik was kind enough to answer a few questions before this years event.

The event runs from 10am to 4pm on Saturday, September 22nd. See
www.boisechickens.com for details and registration information (along with
pictures from last year’s tour). We have various bikeable locations in NW
Boise and several coops in Eagle. The After Party follows the tour at North
End Organic Nursery (NEON) from 4-7pm. (Folks will still have time to hit
the Land Trust of the Treasure Valley’s shindig that evening). Last year we
did two days with around 10 coops in each location (too much) so we’re
sticking to one day this year.

2. How long have you been in "chickens"?

I got my first chickens in the spring of 2007. Three Silver-Laced Wyandottes
named Feather, Sparkle and Monkey Banana. They were soon joined by
Australorp Iris and Easter Egger Ginger. Their coop featured some recycled
materials from Second Chance and a few other projects. Here’s a picture of it
before it got covered by poo and chicken dust. 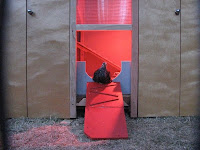 I used to run a community garden and fisheries coop in Salt Lake City, and
have always been interested in polyculture. I’m still threatening to add some
fish tanks to raise tilapia and prawns.

3. We love the Boise Tour de Coop posters past and present, who designs these and
what is the inspiration?

Thanks! I’ve kinda done the art direction on promotional materials the past
three years. The first ‘Chicken Head’ art was a photo I took of two of our
Wyandottes and processed in Photoshop. I added the eggs to the type as an
afterthought. 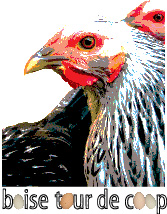 Last year we commissioned Ward Hooper to design the super cool bike
wheel/chicken rider art. This year Chelsea Snow at bricolage turned me on to
local artist James Lloyd as soon as she heard about the ‘Henzilla’ theme...he
rocked it. I manage the boisechickens site and we all use the FaceBook page
to share info.

4. Can you comment on the growth of backyard chickens in Boise? How do you feel
about it?

Well, the theme this year is ‘Rise of the Chickens,’ which is a nod to a
recent 2012 study that estimated around 90,000 urban chicken coops in
the U.S. and projected that number to double next year. I think backyard
chickens are like many things. Done right, they are an urban analogue to 4H,
providing fresh eggs, recycling scraps, controlling insects and generating
some thermonuclear-grade material for compost. But there is a downside
to chickens if folks don’t pay attention to conditions and let noise, flies
and odors become a nuisance for neighbors. It’s important for folks to be
responsible and considerate. We’ve always subscribed to the ‘Eggs for Peace’
program with our neighbors. I’ve heard some not-so-nice stories of neighbor
issues, some involving dogs.

5. What safety precautions are taken to prevent coop to coop contamination?

We consulted the folks at Wasatch Community Gardens (I was the E.D. back
in the 90s) in Salt Lake City and use foot baths with a peroxide solution at
each location. We ask visitors to step through the solution both entering and
exiting each coop location. We also alert hosts to this issue and encourage
them to be aware.

6. What are your favorite types of chickens? Why?

Personally, I like our Wyandottes and Australorp for personality; they’re
good listeners. Our Easter Egger is a drama queen. All our girls have pretty
much slowed down or stopped laying after 5 years. I’m interested in maybe
getting one or two Buckeyes (purportedly good mousers) and Marans for
their cool chocolate eggs.


Maps. Following traditions established in other Tour de Coop events, there
are no 'tickets' per se. We're encouraging visitors/tour guests to register
online at http://2012boiseeagletourdecoop.uticketit.com. Once registered
(and when the maps are finalized this evening), each registrant will be sent
a map that can be shared with family or a small group of friends (around
five people, give or take). This is in part how we cover our individual out-of-
pocket costs for posters and such like, and create a foundation for next year’s
event. Folks are on the honor system here, and we trust that no one will copy
and distribute or forward the map.

Shirts. The shirts this year turned out great, thanks to artist James Lloyd and
the pros at Deadwood Designs. We have Men’s and Women’s styles, Youth
sizes and will be ordering limited edition black tees for the grunge-at-heart
crowd.

After Party. The charming and talented ladies at NEON are so amazing.
They are hosting the After Party this year (They hosted in Year 1 and then
Zamzow’s hosted last year), and have arranged for Payette Brewing and
several food trucks to be on site. They have also organized some live music
for the event, which runs from 4-7pm on the 22nd.

Directions to coops. Besides the maps, we’ll have 11" x 17" host posters
with the Henzilla art and the word HOST in big letters. These get posted
at gates and driveway entrances to take the guesswork out of the final
approach.

Hygiene/safety. You’ll also see a poster that encourages safety and hygiene
that should be near the foot bath at the entry/exit point of  the chicken area.

Who is doing this and why? Short list consists of Gretchen Andersen (author of The Backyard Chicken Fight), Martha Lane, Elizabeth Donick-Swisher, Sallie Herrold
(who just purchased and is rehabbing the Hollywood Market), and Kelsey Nunez.
In 2010, I ran into Dave Krick from Bitter Creek shortly after returning from the Salt Lake
City Tour de Coop, run by an organization I led in the early 90s. They now
have an entire ‘Chicken Week.’ Dave had wanted to do something like that
in Boise to help folks share information about chicken wrangling so, a few of
us got things organized and made it happen. I still maintain this is all Dave’s
fault.

We all chipped in to plan and implement the tour, and crossed our fingers
that we would not lose money. We partnered the first two years with a
local nonprofit and donated the net to them at the end of each year. We are
currently negotiating with another local food-related nonprofit to take over

the tour's administration and finances, while offering to help with the heavy lifting
on a voluntary ad-hoc basis in the future.

We'd love it if other folks wanted to step up and get involved going forward, and we’ll have a volunteer signup sheet at the after party. It's a fair bit of work and time, but people seem to enjoy the tour and it's a good way for someone to understand what backyard chickens are about

If I was closer (as in not all the way across the country) I would come to this. Well done! Great graphics, well-planned. Post lots of pics, please.

Would love for you to share this on my blog hop! I just LOVE the planning and your poster! Hope you have a wonderful turn-out and please do take photos-lots!!